Hey this is Tommy of To The Chest. I just want to talk about something interesting that I think years possibly seeing in the news. And it is about the Donald a.k.a. Donald Trump. Now you'll hear a lot both for and against Mr. wonderful. Some people cannot understand why so many people like him. You hear he's racist, condescending, bigoted, full of himself with an ego bigger than Mount Everest. Oh I'm sorry, Mr. President bubble head just change the name to Dinali with an executive order. Ain't that quaint!! Getting back to Mr. Trump. He may be a little of some of these things. He does seem he believes to know better than anybody else, implying that unless he knows you you're an idiot. But that's really not the issue is it? If you take a look at his recent poll numbers, there's a reason why so many Americans are attracted to him. How about being tired of establishment politicians always going back on their word. Let's take a look at the Republican Party. They  say that their values are, pro-life, pro-business, smaller government. Now the question is have they actually accomplish anything since the 2014 midterms? And what I am referring to is have that passed or blocked legislation, nominees etc, based on the platform that they ran on? 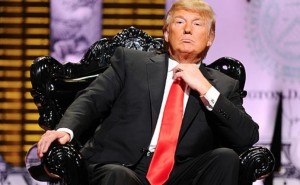 For being so pro-life, they don't even have the courage to shut down the government so that Planned Parenthood could be defunded. What do I mean by this? RINO, Mitch McConnell says that we don't have the votes to defund Planned Parenthood. OK there is more than one way to skin a slimy cat. You can submit a budget that does not include funding for Planned Parenthood. Now obviously all of the pro abortion legislators will not approve this. Fine, then let the government shutdown. This is about life or death. There are videos which show members of Planned Parenthood speaking about trafficking baby parts and including whole fetuses for sale. Are you kidding me? What makes pro-abortionists different from the Nazis? What are these establishment idiots so worried about, unless they got some funding in the closet which would be upset by forcing the issue with the government shutdown. Now can you see the attraction to Trump? Basically, he goes against the grain. He spouts off a populist rhetoric that is attractive to people who are fiercely fed up with the lying that is prevalent in today's Congress, the lack of spine that is prevalent in today's Congress and the lack of a moral compass in today's Congress. Yes, Trump may be a closet progressive, but he has tapped into something that the media and people who disagree with him do not understand. The only way to beat Trump is for the other Republican presidential hopefuls to specifically say what they will do to the issues that are closest to conservative American hearts and dreams. They will also need to close the trust gap, because so many times voters have given their trust to their Republican Representatives only to be betrayed after they are in office. The Republican nomination is up for grabs. It will depend on who has the vision and can win the trust of the voters, to become the Republican nominee for president of the United States.   More about me. If you need to get a hold of me, the click here.